159-The Mozart of Mathematics

159-The Mozart of Mathematics 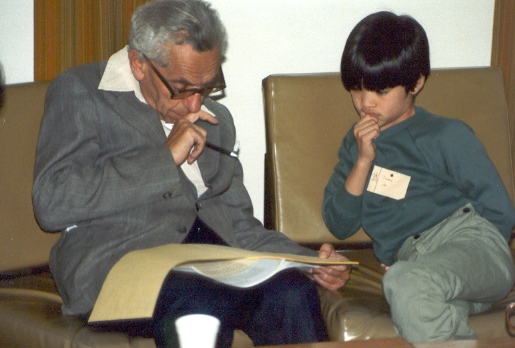 Mathematician Paul Erdős had no home, no job, and no hobbies. Instead, for 60 years he wandered the world, staying with each of hundreds of collaborators just long enough to finish a project, and then moving on. In this week's episode of the Futility Closet podcast we'll meet the "magician of Budapest," whose restless brilliance made him the most prolific mathematician of the 20th century.

Sources for our feature on Paul Erdős:

Paul Hoffman, The Man Who Loved Only Numbers, 1999.

The magisterial biography of Erdős. The first chapter is here.

Krishnaswami Alladi et al., "Reflections on Paul Erdős on His Birth Centenary," Parts I and II, Notices of the American Mathematical Society 62:2 and 62:3 (February and March 2015).

N Is a Number: A Portrait of Paul Erdős, Kanopy Streaming, 2014.

Above: Erdős teaching 10-year-old Terence Tao in 1985. Tao is now recognized as one of the world's finest mathematicians; he received the Fields Medal in 2006.

This week's lateral thinking puzzle was contributed by listener Waldo van der Waal, who sent this corroborating link (warning -- this spoils the puzzle).

You can also make a one-time donation on the Support Us page of the Futility Closet website or buy merchandise in our store.