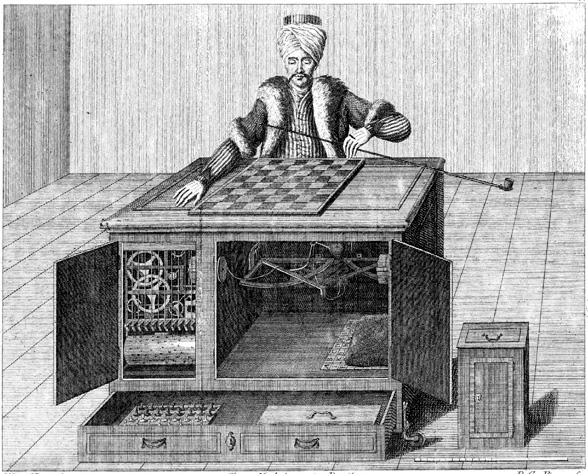 In 1770, Hungarian engineer Wolfgang von Kempelen unveiled a miracle: a mechanical man who could play chess against human challengers. In this week's episode of the Futility Closet podcast we'll meet Kempelen's Mechanical Turk, which mystified audiences in Europe and the United States for more than 60 years.

We'll also sit down with Paul Erd&#337;s and puzzle over a useful amateur.

An octopus named Paul picked the winners of all seven of Germany’s World Cup games in 2010.

Sources for our feature on the Mechanical Turk:

James W. Cook Jr., "From the Age of Reason to the Age of Barnum: The Great Automaton Chess-Player and the Emergence of Victorian Cultural Illusionism," Winterthur Portfolio 30:4 (Winter 1995), 231-257.

Nathan Ensmenger, "Is Chess the Drosophila of Artificial Intelligence? A Social History of an Algorithm," Social Studies of Science 42:1 (February 2012), 5-30.

Brian P. Bloomfield and Theo Vurdubakis, "The Revenge of the Object? On Artificial Intelligence as a Cultural Enterprise," Social Analysis 41:1 (March 1997), 29-45.

Mark Sussman, "Performing the Intelligent Machine: Deception and Enchantment in the Life of the Automaton Chess Player," TDR 43:3 (Autumn 1999), 81-96.

James Berkley, "Post-Human Mimesis and the Debunked Machine: Reading Environmental Appropriation in Poe's 'Maelzel's Chess-Player' and 'The Man That Was Used Up,'" Comparative Literature Studies 41:3 (2004), 356-376.

You can play through six of the Turk's games on Chessgames.com.

Natasha Frost, "The World's Most Mysterious Medieval Manuscript May No Longer Be a Mystery," Atlas Obscura, Sept. 8, 2017.

This week's lateral thinking puzzle was contributed by listener Alex Baumans, who sent this corroborating link (warning -- this spoils the puzzle).