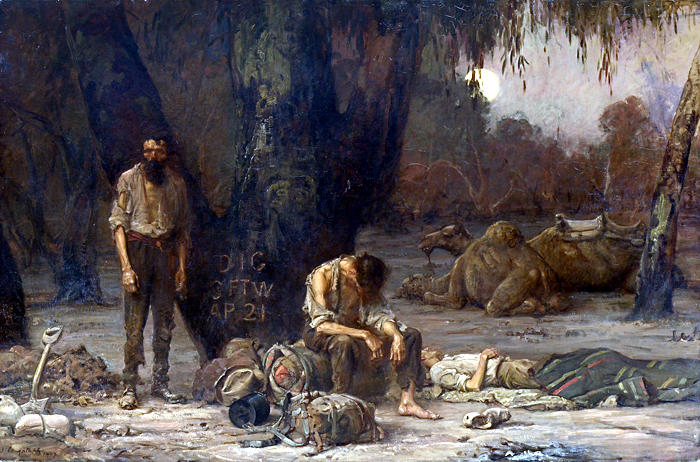 In 1860 a party of explorers set out to traverse the Australian continent, but bad management and a series of misfortunes sent it spiraling toward tragedy. In this week's episode of the Futility Closet podcast we'll tell the story of the Victorian Exploring Expedition and its dramatic climax at Cooper's Creek.

We'll also try to validate Archimedes and puzzle over an unlucky thief.

In 1990 Jon Perez Laraudogoitia wrote a philosophy article that compelled its own acceptance.

In 1976 architect Robert Venturi found a way to commemorate a house with no surviving description.

Sources for our story on the Burke and Wills expedition:

A.W. Howitt, et al., "Exploring Expedition From Victoria to the Gulf of Carpentaria, Under the Command of Mr. Robert O'Hara Burke," Journal of the Royal Geographical Society of London 32 (1862), 430-529.

The Diary of William John Wills.

William John Wills, A Successful Exploration Through the Interior of Australia: From Melbourne to the Gulf of Carpentaria, 1863.

Dave Phoenix, "Burke and Wills -- An Overview of the Expedition, Its Preparation, Planning and Outcomes," Queensland History Journal 21:8 (2012), 497.

Deirdre Slattery, "If Burke Had Been a Naturalist ...: Telling and Re-Telling National Narratives," Australian Journal of Outdoor Education 8:2 (2004), 13-21.

"Memorandum on the Recent Journeys of Exploration Across the Continent of Australia," Sydney Morning Herald, Dec. 20, 1861, 7.

This week's lateral thinking puzzle was devised by Sharon. Here's a corroborating link (warning -- this spoils the puzzle).