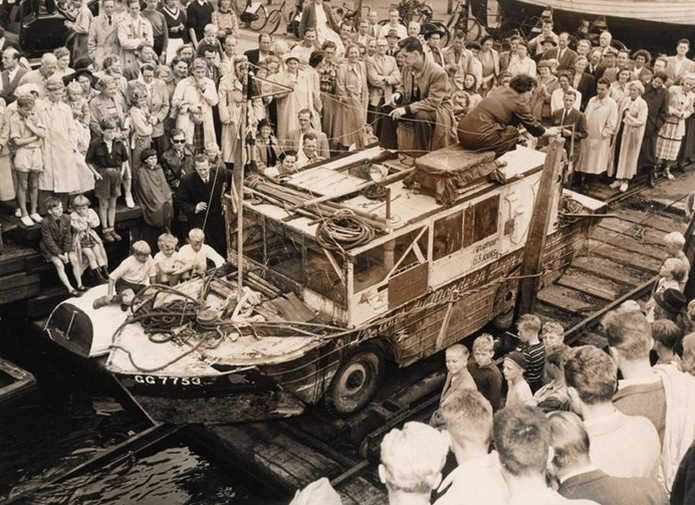 In 1946, Australian engineer Ben Carlin decided to circle the world in an amphibious jeep. He would spend 10 years in the attempt, which he called an "exercise in technology, masochism, and chance." In this week's episode of the Futility Closet podcast we'll describe Carlin's unlikely odyssey and the determination that drove him.

We'll also salute the Kentucky navy and puzzle over some surprising winners.

During World War II a New Zealand duck served as sergeant in a U.S. Marine battalion.

Sources for our feature on Ben Carlin and the Half-Safe:

William Longyard, A Speck on the Sea: Epic Voyages in the Most Improbable Vessels, 2004.

"Guildford to Get a Taste of Adventure," Midland Kalamunda [Western Australia] Reporter, April 17, 2018, 5.

"Half-Safe Inspires Couple in Their Travels Across the Globe," Midland Kalamunda Reporter, July 7, 2009, 3.

Text of Kentucky House Resolution 256, "Encourage the Purchase of a Submarine to Destroy Casino Riverboats":

A RESOLUTION encouraging the purchase and vigorous use of the USS Louisville 688 VLS Class submarine.

WHEREAS, in the past few years the scourge of the casino riverboat has been an increasingly significant presence on the Ohio River; and

WHEREAS, the Ohio River borders the Commonwealth of Kentucky; and

WHEREAS, the siren song of payola issuing from the discordant calliopes of these gambling vessels has led thousands of Kentucky citizens to vast disappointment and woe; and

WHEREAS, no good can come to the citizens of Kentucky hypnotized from the siren song issuing from these casino riverboats, the engines of which are fired by the hard-earned dollars lost from Kentucky citizens;

NOW, THEREFORE,
Be it resolved by the House of Representatives of the General Assembly of the Commonwealth of Kentucky:

Section 1. The House of Representatives does hereby encourage the formation of the Kentucky Navy and subsequently immediately encourages the purchase and armament of one particularly effective submarine, namely, the USS Louisville 688 VLS Class Submarine, to patrol the portion of the Ohio River under the jurisdiction of the Commonwealth to engage and destroy any casino riverboats that the submarine may encounter.

Section 2. The House of Representatives does hereby authorize the notification of the casino riverboat consulate of this Resolution and impending whoopin' so that they may remove their casino vessels to friendlier waters.

(To find the resolution on the website of the Kentucky General Assembly, search for the term "submarine" in the Legislative Record for the 2002 Regular Session.)

This week's lateral thinking puzzle was contributed by listener Frank Kroeger, who sent this corroborating link (warning -- this spoils the puzzle).